There was a moment in my life where I never let the sunshine touch my skin. Before I stepped out into the world, I needed to paint over my acne scars, flick a wing at the edge of my eyes, and color in where the hallows of my cheeks should be. I played with pinks and reds and purples and spent unfathomable amounts of time and money on figuring out how to look flawless, chiseled, highlighted in order to make myself feel powerful, fierce, capable, beautiful.

For a bit of context, I spent most of middle school looking like this: 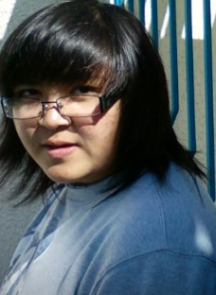 I was in the midst of the existential turmoil that comes with puberty, and looked up to  punk icons like Sioxsie Sioux and Brody Dalle, thence the awful haircut that definitely broke my mom’s heart. There were many instances where it was me versus the daughter she had imagined: a daughter who would have had long hair and worn clothes besides her brothers’ band t-shirts and the godforsaken Jack Skellington hoodie I refused to take off. I remember crying one evening before church because my mom insisted I wear a green and yellow floral top; we begged each other without much avail to understand the opposite sides of that blouse. On another instance, she confided in me the painful embarrassment she went through over how I looked, all because someone had mistakenly referred to me as her son. This was also the time where I was beginning to explore my sexuality and gender identity: I started researching about the LGBTQ community and came to realize that not only was I queer, I didn’t really identify with the standards placed onto women. I wasn’t beautiful or feminine and didn’t want to waste my time on striving to be either of those. As the sole girl in a litter of 4 rowdy kids, I had abandoned my Barbies in 3rd grade and turned to WWE, Tekken, basketball, and all other things that frustrated the hell out of my mom and dad. So I abandoned society’s preset principles of femininity  and embraced the fact that I just happened to look like a pudgy teenage boy. But freeing myself of these expectations didn’t make me happy — quite contrarily I was still miserable about being ugly even though I had already accepted it as my fate.

The melancholy of middle school began to wear off towards the end of 8th grade. My friends and I, the Nerd Cave Crew, shunned the idea that girls had to be petite and cute and have shiny long hair while we proudly rocked our completely-punk-and-NO-my-mom-did-NOT-buy-this-from-Hot-Topic identities. I comforted myself from the fact that I was not conventionally attractive by completely disregarding society’s expectations of attractiveness, but I still avoided mirrors and stooped my head in social situations in the hopes that I would not be seen.

The first time I remember actually studying my face and seeing that it really wasn’t that bad was the night of the 8th grade formal dance.  Having no makeup of my own, I used one of my mom’s Estee Lauder palettes and swiped a pale glittery purple on my eyelids, then smudged a bit of eyeliner on my lower lashes just like the girl on YouTube showed me. After applying mascara and curling my eyelashes with the terrifying metal contraption, I looked in the mirror and saw a girl. It was the first time my Nerd Cave friends saw me in a dress or wearing makeup, and the first time in my teenage years that I felt pretty. I couldn’t help but feel a bit more human because I finally resembled what I assumed society, my mom and dad, what the world expected from me.

At first makeup was liberating because it gave me control over how I could look like. I was never the pretty girl, so to finally have these tools to emulate some sort of beauty felt like finally grabbing hold of mjolnir after a long battle where I had been fighting naked and vulnerable.

I began buying my own makeup and religiously watching beauty videos on YouTube during my freshman year of high school. I experimented with eyeshadows and lipsticks, developed a detailed face routine with foundation, contour, and blush, and perfected the art that is winged eyeliner. High school was pretty fun for me: I still wasn’t skinny or as pretty as the other girls but every morning I sat in front of the mirror and studied the canvass of my face, thinking Yeah, I can work with this.

Of course, plastering one’s face every single day with cheap foundation and powders in the throes of puberty is going to be rough on anyone’s pores. My skin had never been the greatest, but throughout high school and my freshman year of college it was constantly a cycle of covering up those swelling, pus-filled bumps on my face, scraping off the makeup at the end of the day with expensive acne-fighting products and desperate hopes, then finding new inflamed bumps the very next morning. Makeup was my tool to feel human and deserving of social interaction, but what good is hammering a few nails on a wall with no foundation?

Studying abroad in high school and college did wonders for my self-esteem because I had proved to myself that I was smart and brave enough to explore the word. I lived in cities I had never even dreamed of visiting, and met and befriended people of different walks of life. But being the teenager that I was, neither intelligence nor courage sufficed. I still felt like the one in the friend group who had to be funny and outrageous to make up for what I lacked in looks. Looking back now, I can’t help but regret all the time, money, and space I wasted lugging around my makeup to different parts of the world. I would wake up in my dorm at school or whatever hostel we were staying in and rush to the bathroom to put on my face. Without the comfort of foundation, contour, and eyeliner I didn’t want others to see me, see the red mountains lining my jaw, the bulging lack-of-cheekbone, and the short and straight eyelashes that left my eyes dull.

It was after I had dropped out of NYU, started working at Starbucks while finishing school online at Arizona State, and discovered my love for the outdoors that my relationship with makeup began crumbling. At first it was sheer laziness — the early mornings and 6-8 hours of steaming milk and pouring espresso shots just didn’t seem to call for any makeup.

Then, seeing my bare face on a daily basis began to desensitize me to the insecurities I had garnered over the course of puberty and my young adult life. I found that the shape of my eyes were actually quite pretty, and that I do indeed have cheek bones. My features are not as sharp or defined as others’, but why do they have to be? After years of abusing it with pore-clogging concealers and powders, and harsh chemicals to negate the effects of the former, I began taking better care of my skin and body. In turn it thanked me by clearing up the acne that had riddled my face and self-esteem for so many years — the less makeup I wore, the more beautiful I realized I actually am.

So here I am at 23, with a full-time “big girl job” at an office and a dream to travel the world while helping others while I do it. One of the ways I want to help you is to open up a discussion about makeup and insecurities. Sure, makeup can be used as a medium for self-expression and empowerment. AOC’s iconic red lip and hoops are a way of paying homage to her Bronx background and a big “Fuck you” to those who don’t think fashionable or pretty can exist alongside intelligent and strong. Frida Kahlo was known to  accentuate her unibrow and facial hair despite the ridiculous expectations that women should not grow hair anywhere besides where society has deemed appropriate. Drag queens bake and highlight and carve out impeccable eyebrows while questioning gender identities that are forced upon us by social norms. These are just a few examples of how makeup is freeing and empowering.

But when it becomes the crutch upon which one desperately leans in order to feel worthy to face the world, I’m afraid it’s the makeup that is wearing you.

I was a bit afraid of going to work without makeup, terrified that people would think I don’t take myself seriously or care how I present myself. While I do reject what society says how I should dress/act/feel/speak as a woman, I also care deeply about the image of myself that I put out into the world. But I can paint myself just as well and even better with words, action, and work as with some blush or eyeliner. So I am dumping you, makeup. As the title suggests, this is my official breakup letter.

We have had a long and complicated relationship over the past few years. I discovered you when I was young and quite vulnerable, and you embraced me with open arms and showed a side of me I had never thought to look for. Thank you for helping me find and accept my femininity, and thank you for being on fleek for so many years.

Having said this, there were parts of our journey that weren’t so great. I spent so much time and resources on you, time and resources that could have gone to things that make me feel happier. I missed out on precious sleep and countless breakfasts because I was so dedicated to you and thought you were the only thing that could help me face this world.

What I have come to realize is that I simply don’t need you anymore. I can’t say I’m sorry that I’m ending it like this, so I just want to you to know that we’ll still be friends. There are still weddings and parties in the future where I might reach for you, but only because I want you. Not because I need you.

So thanks again for making me look skinnier when I thought that was an important thing to strive for, thanks for making me feel powerful when I wore red or purple lipstick, and thanks for the fierceness I found with winged eyeliner. I am so grateful you helped me find these things, but I am beginning to realize that I can feel powerful, fierce, strong, capable, and beautiful without you.

4 thoughts on “Breaking Up with Makeup”