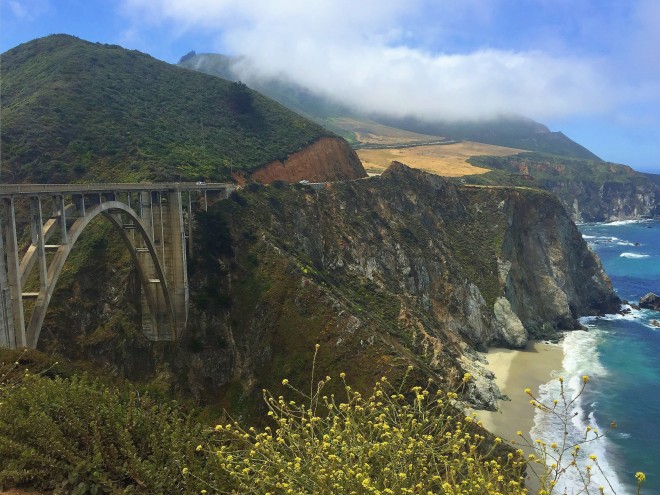 The first glimpse of it is almost shocking. After miles of winding greenery and fruit stands, the highway begins twisting around hills and hugging the coast. At first, the water is subtle. It peeks between hills and trees and you roll down the window to see if you could smell the sea. The subtle hint of salt teases your nostrils, just as the small glimpses of water do. The car makes a final turn around a hill and suddenly it’s a blanket of brilliant blue to your right. From the passenger seat, you stick your right hand out the window and move it up and down through the wind, feeling the waves of the ocean riding with you.

Your first weekend getaway with him was in Big Sur. You made up a story about sleeping over at Abby’s and packed your backpack and rode off in his rickety Honda Civic. The awkward first weeks of dating had passed, and you were wondering where this relationship would take you. This first place was paradise.

In the Julia Pfeiffer State Park, there is a small trail that starts at the edge of the road and begins taking you down through a short tunnel and then onto the side of the cliff. The ocean is larger here than it was from your window, up on the road. You are suddenly reminded of how small you are, how the tiny creature that you are is standing on the edge of the continent, staring into a sea that eventually grows into others, together blanketing the earth. The trail leads you to a viewing platform. Down below, on the other side of the curved edge of the cliff is a small beach with the McWay Falls. The water comes down from crevices on the mountain and hits a pool in the sand, less than a mile away from the waves coming in and out.

He parked the Civic on the side of the road and you both slept in the back, drunk with supermarket whiskey. Every so often a car would pass by, shining through the windows and waking you up. Sometimes you would forget sleep and look up through the windows. He had chosen a spot under a mass of trees, but in between the branches you could see the stars, so plentiful in comparison with the city sky under which you grew up. You imagined how the ocean must look, mirroring those small, twinkling lights, the waves crashing against the cliffs and lapping at beaches now abandoned for the night.

You woke up in the early morning as the sun was still peeking in the horizon. The stars that had shown through the trees were gone, but you saw the premature rays of daylight sparkling in the dew. Your phone blinked with unread messages and missed calls from Mom. She had checked with Abby and found that you weren’t there. He drove to a gas station where you had service and you called, explaining where you were and who you were with. It was the first time she’s ever heard about any boy. There was a feeling of regret, of shame for lying and getting caught. But as much as you felt sorry for sneaking out and lying, you couldn’t help that feeling of satisfaction. Satisfaction that your overdue teenage rebellion had brought you to an Eden, just hours away from home.

The next time you see Big Sur, it is after you two had moved in together. The rickety Civic has long since retired, and you drive in your shared white Honda Fit. Night time hasalready fallen by the time you set out from home, so the winding hills stood dark and glaring against the moonlit sky. The car twists and turns around the dark sentinels. Where small scenes of brilliant blue had shone in between turns and trees, you see glimpses darker than the sky. Finally, the familiar turn comes up. The car curves around the final hill and you are surrounded by black ocean. It is violent this night, sending wave upon wave against the cliff side. But every so often it subsides and the water is still for a few moments. And it is just as you imagined that first night: the stars twinkle in the still water, shining from above and below you. You open the window and stick out your hand, letting it ride in the chilly nighttime wind. 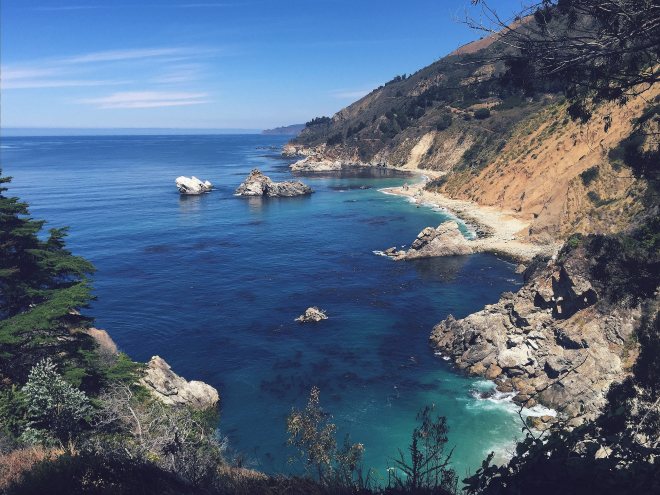 If there’s one thing to know about what kind of person I am, it’s that I love to sleep. From four-minute power naps to ten hour hibernation periods, I appreciate every moment of shut-eye that I can get. And I’m not really that picky. I could lounge and stretch around on a California king in a beautiful villa on the Tuscan country side, or I could curl up with my sleeping bag in the back of my car, parked in the back of Love’s Travel Stop on the side of I-5.

A little tip I learned early on as a traveler is to travel at night. Especially if you’re going on a long distance trip, those 6-10 hours will be a waste if you decide to travel during daytime. Also, tickets tend to be a little cheaper then. So you’re saving money and also utilizing precious travel time by combining sleep and covering distance!

During my year abroad in Florence, my friends and I often found ourselves at train stations and airports in the very late hours of night that stretched into early morning. The comfortable public place I’ve slept –surprise– was the marble floor of Bolgona Airport, in front of a closed Victoria’s Secret. Just remember to wear a good amount of layers (comfy top, sweater, jacket, poofy scarf) for padding and use your backpack as a pillow. Who needs a Hilton?

Now this is a little different when you’re driving, which I do a lot now that I’m back in the states and have a car. But still, my boyfriend and I definitely still prefer the black coat of PM hours to hit the big miles. Less traffic (a HUGE deal in the Bay Area, home of asshole Priuses) and honestly, it’s a lot more peaceful. That being said, I definitely recommend having a good stock of energy-rich snacks and drinks to fuel you for your big drive. We usually have some low-sugar Rockstars or Monsters and some fruit or chips to munch on while we power through the endless highway. But we are human. And once your human brain decides it needs rest, then it needs rest.

So you’re in some unknown town in the middle of butthole nowhere and the nearest rest stop is 145 miles away? Have no fear! These are some places that I’ve tested out and have worked for me:

In addition, here are some things you keep stashed to make car camping easy and comfortable:

When traveling overnight and car camping, just remember to stay safe and trust your instincts. You don’t have to bust out hella cash on roadside motels but just know your surroundings. We have had trips where we planned on car camping, and ended up booking rooms last minute because I felt weird about the street parking and/or we just wanted a big bed and a shower. Remember this is about saving cash and having fun!