My first glimpse of Alaska was through the airplane window as we touched down in Juneau, just in time for the 10:30pm sunset. I had expected and looked forward to these late night sunsets and the feeling of basking in sun for a majority of the day, but I didn’t realize how jarring it would be to see the sun peaking out in the dead of night. Alaska was peeking her eye at me, daring more than welcoming the weary traveler to explore. 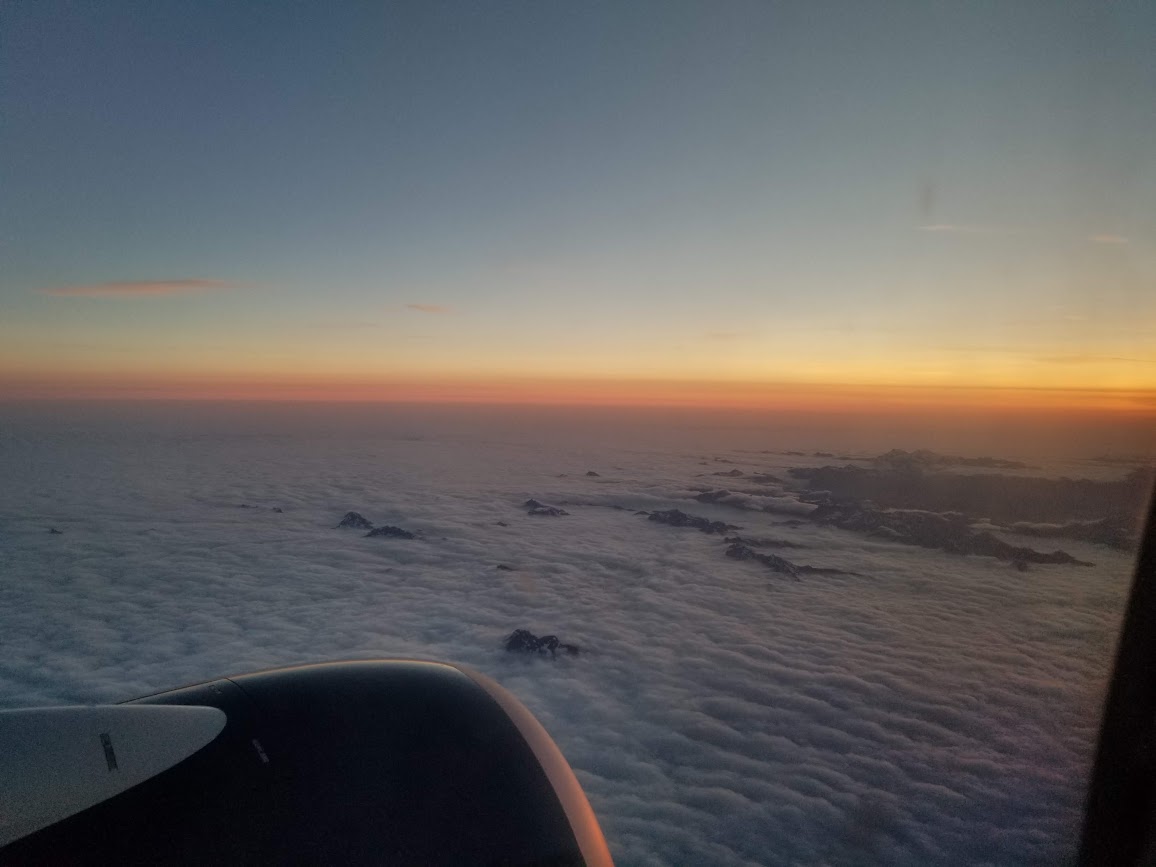 Our first activity was a guided eight-hour hike to Mendenhall Glacier, with Above & Beyond Alaska. They picked us up at our hotel near the airport and drove us straight to the trailhead, where we had a short orientation and gear-up session. We had brought our own backpacks and jackets but our two tour guides advised that it would be a muddy day with a good amount of gear, so we opted to switch to their provided hiking backpacks and windbreakers. Inside each person’s backpack was a helmet, crampons, hiking poles, some intimidating ropey-looking climbing gear, and a bag of snacks! Yay snacks.

Our group was quite large and while most of us were fairly young, there was also a mom and her ten-year-old daughter. There were some gaps as we hiked along the trail but our guides were attentive in making sure there was one in the front and one in the back to make sure the group stayed together. It was about four miles of hiking through the woods and moraines to get to the actual ice. While it was beautiful and lush, the mosquitos and flies were also enjoying the warm weather. Bring bugspray! Being the totally prepared and savvy hiker that I am, I forgot mine in my luggage. Luckily our guides had some on hand but the general rule I learned on this first activity was to just always have bugspray on my person at all times.

After the beautiful buggy hike we came upon the grandeur that is Mendenhall Glacier. It’s big, it’s beautiful, it’s blue, and it’s receding at faster rates every year. There are sign posts every few hundred meters to mark the year in which the glacier had been in that exact same spot. Sadly but not surprisingly the sign posts drew closer as the years crept towards the present.

We were very excited to explore some ice caves but unfortunately due to the extremely hot weather, there were none accessible enough that the guides felt comfortable bringing tourists to. This was a big disappointment but it was just another reminder that 1) Nature is not a theme park and if it were, one must get in line with the expectation and acceptance that the ride may or may not be functioning that day, and 2) the earth is dying at a rapid rate at the hands of capitalist industrialization and tourists not being able to see some ice caves is but a minor inconvenience in the grand tragedy that is human-influenced climate change. Although to be fair, someone in my group was really looking forward to the ice caves and had to rearrange his plans due to their inaccessibility (more on this later….)

Despite this minor disappointment, we had a great time on top of the ice. Our scary climbing gear and helmets were mostly safety precautions in the event that anyone slipped and needed help getting back up, and also set up for some really cool photo ops:

I had just finished Ursula K. Le Guin’s The Left Hand of Darkness, which takes place on a planet called winter and in which the main character goes on a trek across hundreds of miles of glaciers and icefields. Having read this right before the trip was incredibly meta, as I gazed upon that gigantic block of blue and blinding white and wondered at its cold beauty and indifference to my puny human life.

Anywho, besides the day-long hike, we also wandered around downtown Juneau and went back to Mendenhall Visitor Center to check out Nugget Falls. A word of advice on this: when calling for a taxi, ask before booking if you will need to purchase the Glacier Pass from the driver. Our first driver claimed this was a mandatory $25 per person that we would have to pay in the taxi prior to entering the visitor center, otherwise he would have to drop us off two miles outside. We called another taxi company and they said that was some baloney–they dropped us off about 10 minutes outside of the visitor center.

From Mendenhall Visitor Center it was an easy 1-mile walk  to Nugget Falls. The waterfall came upon a small beach from which we had a beautiful view of the glacier from across the lake. There was an adorable dog and baby playing in the water and Ratik, Jennylee, and I skipped some rocks. It was a serene, yet sobering place because while the glacier, lake, and waterfall were breathtaking, one could not enjoy the view without worrying about its rapid decline, and whether it will even be here for our grandchildren to enjoy.

And on that chipper note, we headed back to Juneau airport and flew to Anchorage.

Anchorage is a huge city, especially compared to Juneau. We didn’t do much here except sleep in between driving to our other destinations and walk around the shops downtown, but it was a relief of convenience with big supermarkets and gas stations galore to fill up on roadtrip snacks before we headed to each destination.

Our first destination was about a 7-hour drive from Anchorage, to the remote town of McCarthy. The last leg of the road from Anchorage to McCarthy is an unpaved, dirt road on which one drives for a few hours, eyes peeled for sharp rocks or ancient nails leftover from retired train tracks that crept along the road. If you decide to drive around Alaska, I highly recommend renting high-clearance and 4-wheel drive. It can be a little more expensive and not as environmentally friendly as a cute Prius, but you will thank yourself when you make it through a winding dirt road with no amenities leading into a town in the middle of the wild, Final Frontier.

I have a friend, Matt, who had grown up here and I remember him once telling me that his hometown didn’t have internet or phone lines until 2008. I never really understood this until we stayed in John Adams’s (yes that’s his real name) lovely bed and breakfast on the edge of town. The property resembles a summer camp with detached cabins of varying room sizes and each with their own bathrooms, and a common breakfast cabin with a full kitchen. Despite the heat, our cabin was quite comfortable and John even upgraded us to a 2-bedroom instead of a 2-bed single room. Breakfast was the star of the show, featuring regular Costco comforts like oatmeal, hard-boiled eggs, cereal, milk, and fresh fruit, as well as homemade banana bread that John’s wife had just made the day previous. One thing I would like to note about this place is to be ready to lug your stuff from the front parking lot to your cabin. There is a platform connecting them that makes it easy for rolling luggage, but you will still have to pull them through a short dirt patch to get to the platform. It’s not backpacking up Denali, but it’s good to know ahead of time, especially if you are a crazy overpacker and have 90 pounds of just-in-case underwear and Walmart-sized hair products.

Getting into the actual town of McCarthy is easy, but it does take a bit of planning. There is a footbridge that goes over the river, before which is a parking lot ($10 a day). If you want to opt out on paying, you could park about a half-mile before that parking lot at a small visitor center and walk across the bridge. From the footbridge you could either walk a mile into town or wait for the shuttle.

There are things I should note about getting into McCarthy:

1) The shuttle is not so much a shuttle, rather a large van with a cracked windshield, driven by one of the locals. They will warn you about bumpy parts on the road (and there are many) and are completely nice and accommodating, but don’t expect an air-conditioned bus where you can put your feet up and relax before and/or after your glacier hike. Most likely you will be cramped amongst sweaty bodies and backpacks, consciously grooving your body against the movements of the van so as not to smash your head into the window/your neighbor/their muddy hiking poles poking out of their backpacks. That being said, cracked windshields and muddy hiking poles mean adventure, and that’s what you’re here for! Here’s the website with times and pricing.

2) The walk from the footbridge into McCarthy is short but beautiful, passing through a swimming hole and different spots along the river for skipping rocks or dipping your feet for a while. It’s quite dusty, but at this point in your Alaska trip I trust that you’re wearing clothes that you don’t mind dirtying up a bit.

This area is part of Wrangell-St. Elias National Park, the country’s largest national park and home to a large historic mine town and Kennicott glacier. We rode the shuttle from McCarthy’s town center to the visitor center in front of the mine town; from there visitors can explore the abandoned buildings (which still hold the mining and processing equipment) and hike a 4-mile round trip to Root Glacier.

Ratik, Jennylee, and I brought our own crampons and hiking poles so we opted to hike this on our own (props to our fearless leader Ratik for thinking of buying our own gear and avoiding inflated tourist prices to rent them). The hike itself to the mouth of the glacier was fairly easy, although the very end does involve some rocky slopes. We spent about a few hours here, exploring the icy surface. The surface of the glacier extends for miles towards the mountains; I think this was the best place to really understand the physical enormity of glaciers and how they really are rivers of ice.

On our way out of McCarthy we stopped by my friend’s family cabins at Currant Ridge. Matt is currently living the dream in Hamburg, Germany, but we did get to meet his brother, Robert, and hang out while our fearless leader figured out our lodging for the night (we had planned on driving to a remote town called Whittier but their tunnel would have been inaccessible at our late ETA). Robert was a great temporary host and gave us a tour of their house and the cabins on the property. He had just come in from a hike to some ice caves, and we all bonded over fantasy novels and actuary science, which he’s studying in school. Thanks again for the water and the tour, Robert, and good luck with school!

McCarthy was definitely one of my favorite places in Alaska, not only because of the remote, wild beauty that made me feel like Bear Grylls, awesome glacier hike, and fascinating mining town, but because of the relaxed chill and nonchalant hospitality I saw in the people who lived there. Matt is an incredibly cool dude but he’s also genuine and kind, and now that I’ve explored his hometown I can see why and how he’s turned out that way. I may be overromanticizing my vacation because I’m writing this whilst eating an overpriced salad in my cubicle in the middle of the Financial District, but it seems like most of the Alaskans I’ve met are exceedingly chill and are always up for adventure and friends.

I’m currently working on remembering and journaling the rest of my trip, so stay tuned for more cheesy and overly sentimental recollections of the Last Frontier!